On May 19, 2021, the Aerospace Museum of California hosted the grand opening and dedication of the Old Crow Café, which was inspired by Colonel C. E. “Bud” Anderson, a 99 years young, World War II Triple Ace Pilot, and friend and supporter of the Museum. Colonel Anderson, a Sacramento area local, was the guest of honor and led the ribbon-cutting ceremony with our Executive Director, Tom Jones. He charmingly told the backstory of "Old Crow," and why he chose the name for his P-51 Mustang fighter plane, "I tell most of my my non-drinking friends, its named after the most intelligent bird in that flies in the sky, but my drinking buddies all know it was named after that good old Kentucky street bourbon whiskey."

The café was dedicated in memory of the late Kelly Kreeger, who was not only a friend to the Aerospace Museum of California but was the president of the official Colonel C. E. "Bud" Anderson Fan Club. After her passing in 2020, Kelly’s estate donated many World War II artifacts and memorabilia to the Museum, which inspired our staff to create the Old Crow Café and display them inside.

After the ribbon cutting, fans stood in line to meet Colonel Bud Anderson, the highest scoring living American fighter ace. Many came folks came with their copy of To Fly and Fight: Memoirs of a Triple Ace, Colonel Anderson’s harrowing book about his experience in World War II. The thrilling memoir, which is also available in our Museum gift shop, explores Colonel Anderson’s experience flying a P-51 Mustang during two combat tours where he saw 116 combat missions (480 hrs) in which he destroyed 16 and 1/4 enemy aircraft in aerial combat and another one on the ground. 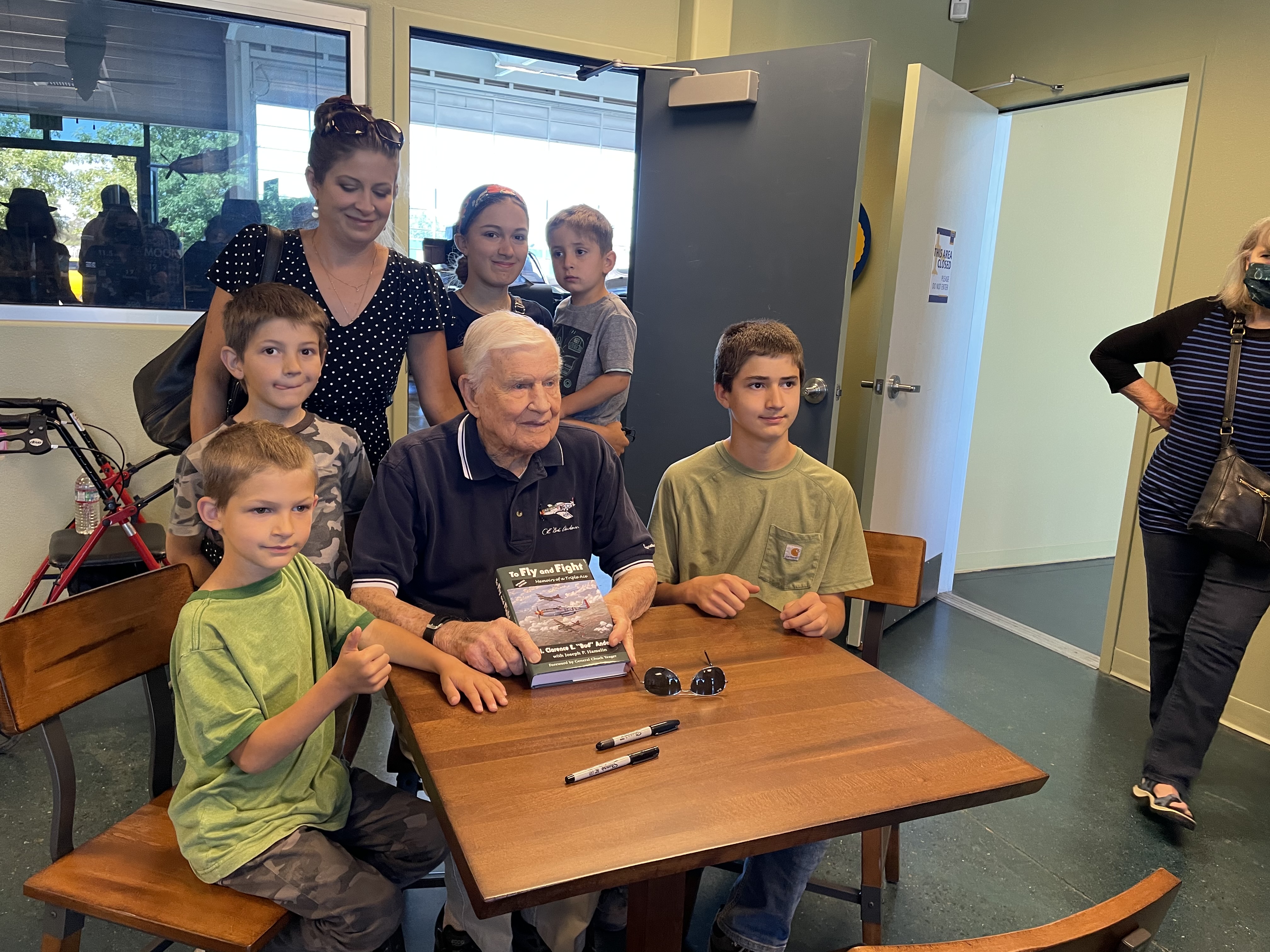 Colonel Anderson took time to sign books, greet guests, and explore the Old Crow Café. Executive Director Tom Jones remarked, “We were honored to have Colonel Bud Anderson join us in the dedication and ribbon cutting of our Old Crow Café. He is an amazing friend and supporter of the Museum, and we believe our mutual friend Kelly Kreeger would be happy to see the public enjoy the café and all the unique World War II memorabilia on display.”

On your next trip to the museum, stop by the Old Crow Café for a sampling of delicious food and history! We invite you to explore our 4-acre air park and rotating exhibits, families can engage with our STEM activities for all ages and let their imagination soar. A Smithsonian Affiliate and member of North American Reciprocal Museum Associate®, the Aerospace Museum is truly a place where dreams take flight!

Be sure to watch highlights of the Grand Opening of the Old Crow Café from our local news outlets who covered the story!