General Anderson's promotion was recognized at a ceremony at the Aerospace Museum of California, near Sacramento, packed with a room full of family, friends, and dignitaries.

When one of the world's greatest aviators, and one of America's bravest hero's gets awarded Brigadier General, they bring in the big guns. The Presiding Officer officiating the ceremony was none other than General Charles Q. Brown, Jr., Chief of Staff of the Air Force. 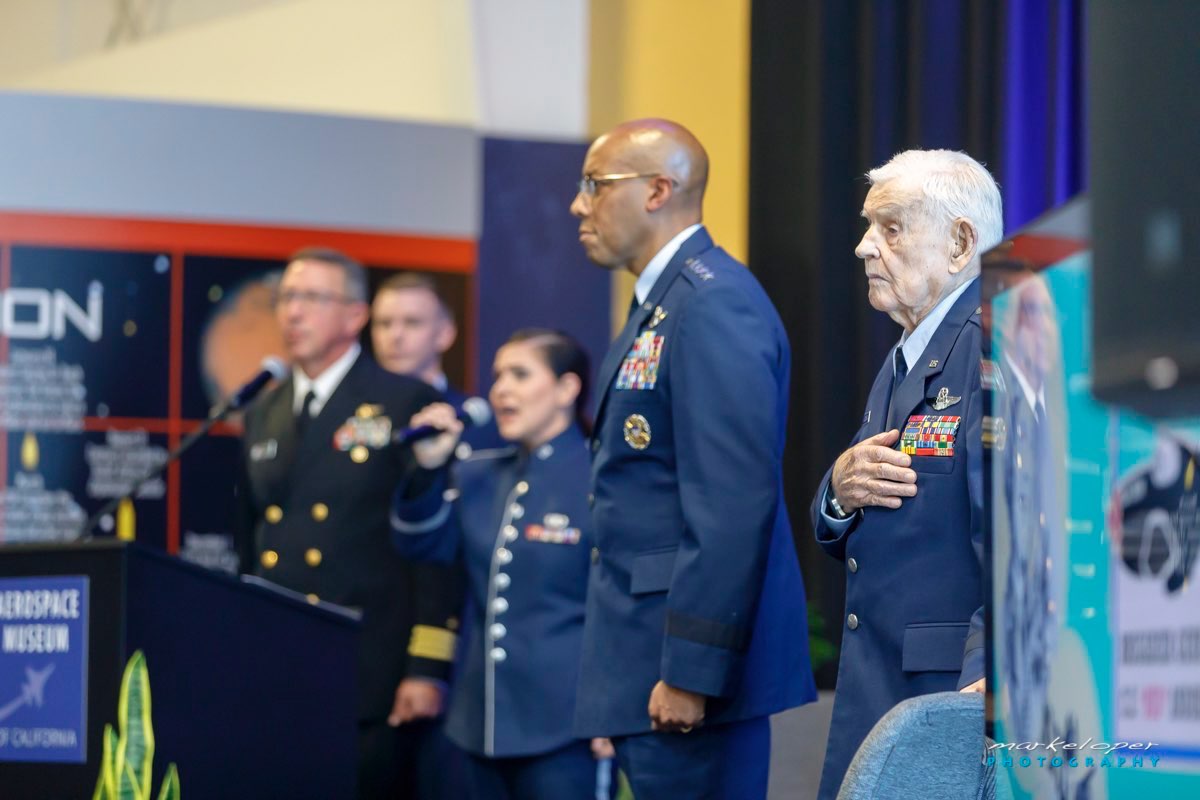 General Brown called Anderson, 100, a “wrecking ball” of a pilot who “many of us probably wouldn’t want to have … behind us, shooting us down.” During his remarks Brown said, "I get service records of each member of the Air Force I have a chance to promote. Bud, your binder was pretty thick... the impact you had on the history of our Air Force reminds me how fortunate we are to stand on the shoulders of gentlemen like you, and those other ladies and men who have served within our Air Force to make us great... I consider you, Bud Anderson, General Office Material."

50 Years in the Making

General Anderson waited 50 years for this promotion, he retired in 1972 and was promoted to Brigadier General 50 years later. A group of local and national individuals petitioned the Secretary of the Air Force for the promotion. In order for a retired member of the military to receive an honorary promotion, Congress must either pass a law, or a member of Congress must request a review from the Secretary of the department in which the service member served. Such instances are few and far between. In late 2019, Congress included honorary promotions for Col. Charles McGee of the famed Tuskegee Airmen to brigadier general and for Lt. Col. Richard “Dick” Cole of the Doolittle Raiders to colonel in the 2020 National Defense Authorization Act.

General Brown and Anderson had met before the Dec. 2 ceremony, the Chief of Staff noted. As a student at Air Command and Staff College, as commander of Pacific Air Forces, and as CSAF at the Oshkosh air show this past summer. “Today’s number four,” Brown said. “And so I’m so glad that our paths have crossed so many different times.” 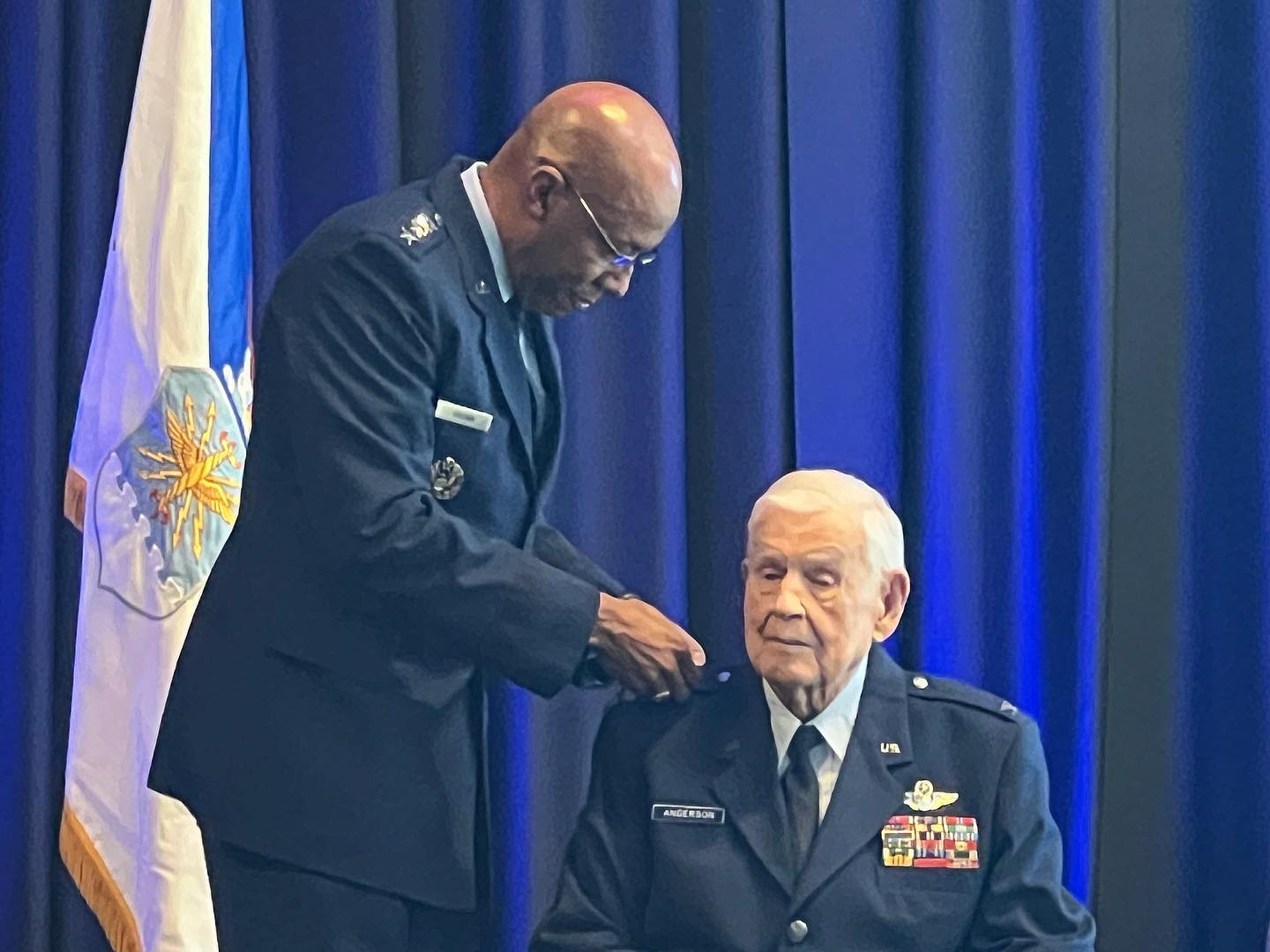 General Brown was proud to pin the insignia on Anderson's shoulders and as he did, the room burst in applause with the audience of over 200 guests giving the new general a standing ovation and tears of gratitude.

Said Brown, “This has been a tremendous honor. And Bud, thank you for making this day possible. Thank you for your service and thank you for all you’ve done for the United States Air Force and for our nation as you continue to serve.”

General officers are presented with their own flag upon promotion to Brigadier General. General Anderson was no exception.

Brigadier General Anderson was given the microphone to make some remarks after his historic promotion. In his Bud-like fashion he had this to say:

"First I want to thank everyone here for coming and for anyone here who had anything to do with my promotion... I usually either have a short talk or a long talk. The short one is 'Thank you...' and the long one is 'Thank you very much.' But this evening exceeds that phrase. To see the Chief of Staff himself come to do this is a bit overwhelming. And to my many friends out there in the crowd I didn't expect to see... thank you very much." 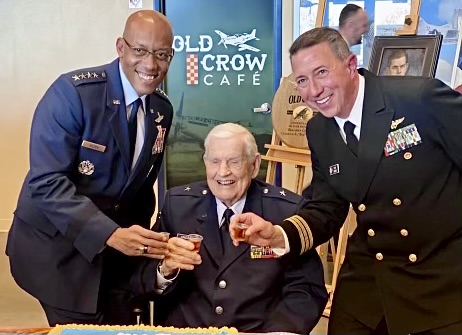 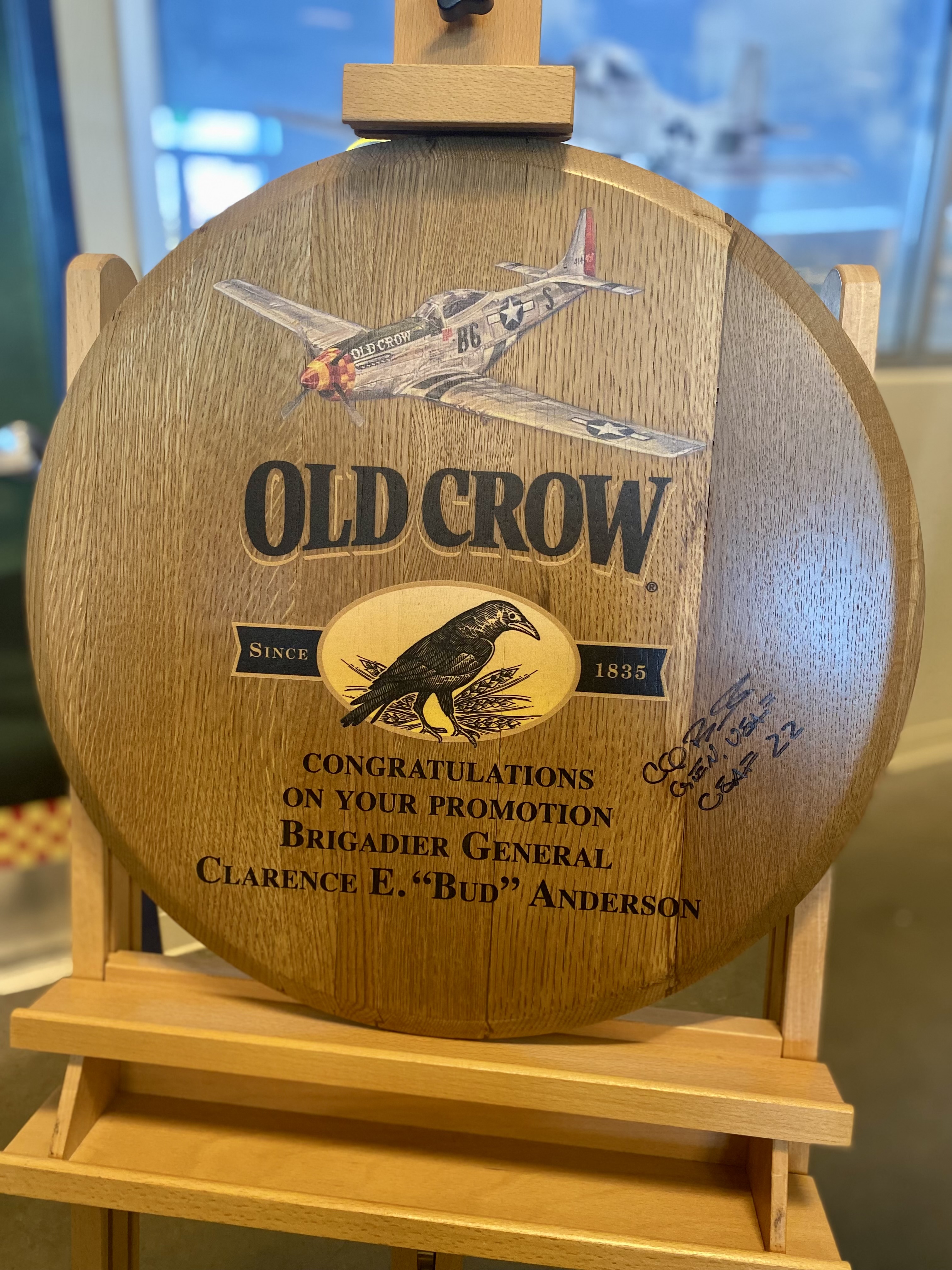 Thank you Jim Beam Distilling Company for the beautiful custom P-51 barrel head. The makers of “Old Crow: shared the following message “General Bud Anderson, Congratulations on your honorary promotion to the grade of Brigadier General. You have had such an incredible career and we love that Old Crow is a major part of your story. We hope that you enjoy this special gift from our James Beam Distilling Co family as we honor you and your legacy.”

Unlike other young World War II pilots of the time, he did not name his plane after his wife or girlfriend because he was single. Instead, Anderson named his aircraft after the cheapest bourbon whiskey brand available at the time, Old Crow.

As General Anderson charmingly recollects, "For all of my church-going friends, I told them that "Old Crow" was named after the smartest bird in the sky. But all my drinking buddies knew that it was named after that smooth Kentucky whiskey."